You Are Here: Successful wrap up of AgroWater project in Palestine

Successful wrap up of AgroWater project in Palestine

In May, the final report of the successfully completed AgroWater research project was submitted. 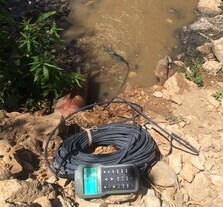 Aim of the project and project schedule

The objective of the project AgroWater was to assess and evaluate the environmental, health and socio-economic impacts of open wastewater streams on nearby or downstream Palestinian communities. During the project period from April 2019 to November 2020, several research trips to the Palestinian Territories were realized and on-site water samples were collected from wells and springs and the assessment of the situation by the local population was surveyed with an extensive questionnaire.

Probably the most important result of the project is that in 2020, fecal coliform bacteria were detected in all water samples tested for coliform bacteria. Since these springs and wells serve as drinking water sources for many people and animals, this is extremely problematic because it poses an increased health risk.

The surveyed communities of Bruqin and Kafr Al-Dik are located only one kilometer apart in mid-western Palestine, below the much larger town of Salfit as well as the Israeli colony of Ari'el. The majority of respondents in both communities believed that raw sewage has negative public health impacts. More than half of respondents from Bruqin village reported contracting a waterborne disease as a result, while 33% reported the same in Kafr Al-Dik. Skin infections, leishmania, amoeba, and respiratory problems were cited as the most common health effects.

The results and corresponding recommendations for safe handling of wastewater and potentially contaminated sources were presented to the local population and local authorities in two local workshops, and some of them were published. In addition, a very close cooperation with the project partners at Birzeit University in Ramallah has developed and two follow-up applications for further research in this area have already been submitted.

The project was funded by the BMBF under grant number 01DH19005.