Goal: Analysis of the flood risk due to heavy rainfall events in the catchment area of the city of Aachen 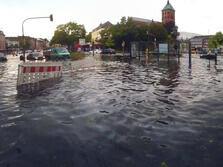 Copyright: © IWW Waste and faeces are distributed in the settlements by floods

The aim of the project is to use hydro-numerical models and GIS systems to investigate the risk of flooding due to heavy rainfall events in the catchment area of the city of Aachen. The topographic and hydraulic hazard analyses serve as a basis for the generation of high-resolution pluvial flood hazard maps as well as for further risk analyses and the derivation of possible measures.

Within the project, the IWW carries out the hydrodynamic modelling of heavy rainfall induced runoff and flow processes with MIKE FLOOD as well as for the subsequent hazard analysis. On the basis of the NRW geodata a numerical 2D overland flow model for the 160 km² catchment area of the city of Aachen will be developed. Subsequently, the influence of the sewer network will be investigated by offline or online coupled 1D modelling and flood critical areas will be mapped with high resolution. The sewer network model is provided by Regionetz GmbH. The numerical model will then be validated on the basis of event data and flood recordings of past heavy rainfall events (April 29 and May 29, 2018) as well as damage reports of the Aachen Fire Department.

The project Heavy Rain Analysis Aachen has been commissioned by the City of Aachen and is funded by the District Government NRW within the framework of the "Arbeitshilfe kommunales Starkregenrisikomanagement".