Goal: The core of the EMfloodResilience project is to become better prepared for the next extreme flood event and thereby prevent future loss of life and socio-economic damage.

In July 2021, the Meuse-Rhine Euregio was hit by unprecedented precipitation, resulting in extreme flooding. Human suffering and damage were enormous in all three countries belonging that are part of the Euregion (Germany, the Netherlands and Belgium). In total, more than 200 people died. Thousands of homes were damaged by the flood, many of which are still uninhabitable. Tens of thousands of people were evacuated during and after the rainstorms because of the floods. The total economic damage is in the billions of euros. The 2021 flood is considered one of the world's top ten natural disasters of 2021, and the IPCC predicts that these events will become more frequent in the future due to man-made climate change. The Meuse-Rhine Euregio must be prepared to prevent repitition of the July 2021 flood. The overall goal of the EMfloodResilience project is to be better prepared for the next extreme flood event and thereby prevent future loss of life and socio-economic damage. 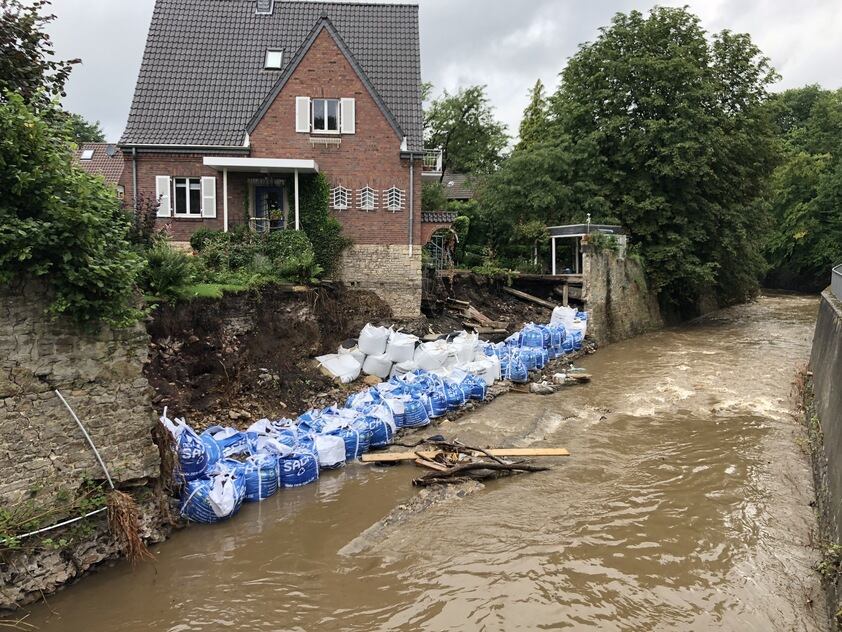 The IWW is involved in two work packages of the EMfloodResilience project. In the course of this project, we will investigate the processes of bridge entanglement and the transport of debris during flood events. For this purpose, the bridge construction methods and debris compositions at bridges in the catchment areas of the rivers Meuse and Rhine will be analyzed for the flood of 2021 and essential influencing factors of the entanglement will be derived. These influencing factors will then be mapped with the help of physical models and their effect on structures and the runoff pattern will be investigated. From this, at the end of the project, recommendations for structure design as well as recommendations for action, such as the design of flood risk and hazard maps including the entanglement probabilities, will be determined.
On the other hand, we are collecting data on the effects of flooding. For this purpose, we are developing a questionnaire together with researchers from the TU Delft and the University of Liège, which will be used to conduct interviews among the affected population in order to establish a link between hydraulic parameters, characteristics of the built-up area and damage data.

The project is being carried out by 11 German, Belgian and Dutch partners and 1 associated partner. The Limburg water board has been found willing to take charge of the project.

Time and again, flood events pose an existential threat to the lives and property of affected residents as well as to industry, agriculture and infrastructure. We had to painfully experience this in our region due to the extreme flooding in July 2021 on the Inde, Rur, Vicht, Kall, Erft and Wurm rivers.

Our neighbors in the Netherlands and Belgium were also affected by this flood and its severe consequences. For this reason, we, the Institute of Hydraulic Engineering and Water Resources Management (IWW) of RWTH Aachen University, together with scientists from the Universities of Liège and Delft, are jointly conducting a scientific project. The aim of this project is to improve flood management in our cross-border region in order to prevent and minimize future floods and their damages. To achieve this goal, we need data from the affected areas. This includes e.g. hydraulic parameters (e.g. water heights), characteristics of the buildings (e.g. size of the house), damages caused by the flood as well as received financial compensations.

To collect this data, we want to conduct surveys among the people in the region affected by the 2021 flood. You also live in an area particularly affected by the flood, so we would like to invite you to participate in our survey and thus contribute to the improvement of future flood protection in our region.

The survey will be conducted by scientific staff of the IWW of RWTH Aachen University directly in the affected areas, i.e. at your home or by telephone.

The results of the survey will be used for scientific purposes only. Furthermore, your identity (name, date of birth) will not be recorded and other personal data will not be passed on to third parties. Participation in the survey is, of course, voluntary. If you would like to participate in the survey, we would be happy to arrange an appointment with you. Please contact us by e-mail or telephone using the contact details provided.

You can download the flyer with all the information here.