You Are Here: Humanized River Systems

Goal: Improvement of the process understanding of the anthropogenic influence on watercourses 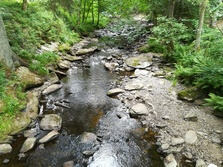 Copyright: © IWW The Rur in the upper reaches near Kalterherberg

The aim of the project is to investigate the consequences of different influences on the Rur at different periods of time (including the Middle Ages, modern times, today and in the future) using geoscientific and engineering methods. A special focus is on the comparison of fluvial morphodynamics in low mountain ranges and lowlands. 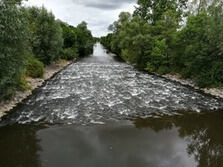 Copyright: © IWW The Rur in the middle reaches at Linnich

The IWW is part of an interdisciplinary team of geographers, geoecologists and engineers, which is used to answer the question of the impact of human influences on the Rur. In the project "Humanized River Systems", funded by the German Research Foundation (short DFG), the IWW is responsible for the sedimentological analysis of the River Rur with regard to morphodynamics. This is coupled to a hydro-numerical modelling with Delft3D in order to systematically investigate and superimpose partial influences on the morphodynamics.

The project "Humanized River Systems" is funded by the German Research Foundation (DFG) under project number 418362535.